» General Information » History of the Isle of Lewis 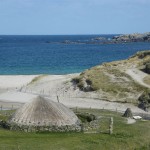 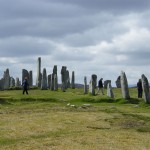 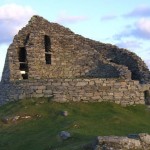 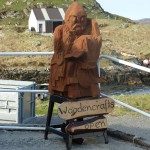 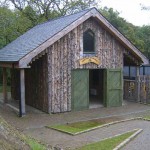 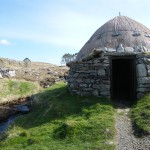 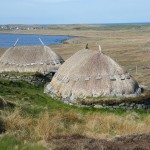 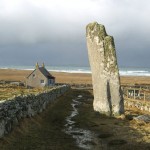 The story of the Isle of Lewis is steeped in both history and mystery. Man has inhabited Leodhas, meaning marshy, for probably 5000 years.
The Standing Stones and Stone Circles bear witness to this early occupation, as do the Iron Age forts and archaeological sites scattered around the Island. Brochs, hill forts and the evidence of the Iron Age that we see today, were constructed from about 250 B.C. to 500 A.D., and mainly on the coastal fringes.
We now observe Lewis with large areas of peat land and bog. However, this was not always the case. Up until about 1500 B.C. the island was fertile, warmer, and much less wet. Farming was predictable, secure and the seafood plentiful. Prior to this time was when most of the monoliths and stone circles were constructed. When the climate changed the people of Lewis adapted, but had to move to the coastal machair areas to survive. The acidic bog areas developed and the peat is the result. A major date in the Lewis historical calendar was 1150 B.C. when mount Hekla in Iceland erupted, producing the equivalent of a ‘nuclear winter’ for Scotland. The effect on Lewis, Harris and the rest of Scotland was devastating. For an interesting article on the subject, click on Hekla

Before and after the re-population of the Hebrides, the Celtic peoples were the predominant social group, with roots back into central Europe. The fortifications that were built on Lewis must have been to defend themselves from other Celtic groups, as this was well before the days of the Viking raiders. Duns and Brochs are basically fortifications, the only difference is that Brochs tend to be bigger. Domestic dwellings had a similar, but simpler construction. An excellent example can be seen at the West end of Bernera where a reconstruction has been made next to the existing iron age village.

Throughout the years from the late 500’s Christianity made its presence felt throughout the Western Isles, mainly through the work of the Monks of St Columba. St Columba brought Christianity from Ireland and established a Christian settlement and Abbey on the Isle of Iona. One fine set of ruins can be visited on the area of land a few miles beyond the airport at ‘Point’ . The ruined church is called St.Columba’s.

Towards the end of the 800’s the relative stability of the Island was rudely awakened by summer visitors from Scandinavia. The Vikings were on opportunist raids to begin with, but by the middle of the 900’s settled in many of the coastal areas and made farms and permanent residences. A few Viking era buildings remain, the best examples for the visitor to see are the Mill and Forge near Shawbost, now renovated and Liamshader near Carloway. The Vikings also left a very important set of artistic relics in the Lewis Chessmen. See opposite for more detail. The real impact of the Vikings though was on the environment. The Vikings were heavy users of timber and relied on it for their houses, boats and fuel. The native woodlands were soon consumed and this vital resource was finally seriously reduced by a Viking leader called Magnus III who instigated a ‘scorched earth’ policy. The Vikings influenced the building techniques for years to come and even during the last few hundred years, the traditional ‘Black house‘ has elements of Viking construction.

The Viking era came to an abrupt end after the Battle of Largs in 1263 when King Haakon of Norway was defeated by King Alexander the third of Scotland. Within three years, all of Norway’s lands in the West were returned to Alexander. Probably this political change meant very little to the well settled Viking farmers who must have been well integrated into the island. However, several clan families were able to establish themselves under the new Scottish regime. The Clans were of mixed Viking and Celtic origin, some of them with traceable names from Norse leaders like ‘Leod’. His sons were therefore Son of ‘Leod’, or MacLeod. Other dominant clans were Morrison and MacAulay, mainly due to their loyalty to the Lords of The Isles, MacDonalds. The place names of Lewis maintain a mixture of Viking and Celtic origin as do many Gaelic words, however, the enchanting soft lilt to the inflexion within the dialect of the modern Leoisher is probably the most noticeable trace of this ancient fusion.