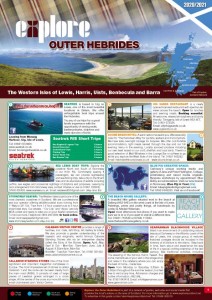 Firstly, in Scotland we have a directory website called Explore Scotland, which is the home website for the rest of the network. The network consists of a range of sites in different parts of Scotland, starting in the north with Explore the Outer Hebrides or Western Isles.

Within the chain of islands are websites about the Isle of Lewis in the far north, the Isle of Harris with its magnificent beaches and hills, the wild and rugged Uists. Both North Uist and South Uist have individual websites, along with the Isle of Benbecula, or stepping stones, in between them.

Linked websites at the southern end of the Western Isles lie the Isle of Barra and Vatersay, with Castlebay being the main Town. If you would like to look at all the islands then go to the website of the Scottish Islands Federation

The Inner Hebrides lie further south and east and are closer to the mainland and Oban. The Isle of Mull is the largest of these inner isles with the Isle of Iona lying at its southern tip called the Ross of Mull. Iona is the island that St. Columba first landed on bringing Christianity to Britain. The town of  Tobermory is the largest habitation in the area with a population of over a thousand and with most of the islands accommodation.

Moving over the water and back to the mainland, the main port is Oban and this town has links back to the rest of Scotland. Inverness is the largest town in the north of Scotland and covers the area around Loch Ness. To the south of Inverness lies Highland Perthshire, with the towns of Pitlochry, Aberfeldy and Killekrankie.

Linked websites towards Glasgow is the city of Stirling, with its magnificent castle and history. Between Stirling and Glasgow lies the Loch Lomond National park with the small towns of Callander and Balloch. Glasgow is the largest city in Scotland, although not the Capital city which is Edinburgh. To the north of Edinburgh lies the historic town of St Andrews with its world famous University.