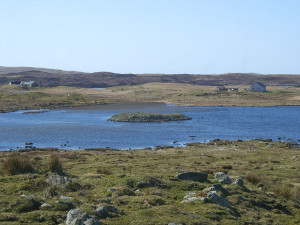 are either artificially or naturally created small islands found in Lochs throughout Scotland, whereupon are constructed habitable buildings. Sometimes the buildings were of stone and other times they were constructed of timber.

The islands were linked to the land by either a stone or timber causeway. In either case, the way onto the island was easily defended against either hostile humans or animals.

Crannogs are probably one of the oldest forms of habitation known excluding caves. They certainly go back over 5000 years into the Neolithic period and continue right through into the 17th Century.

The shape of a crannog was normally circular or oval, from about 15 to 30 metres wide, following the contour of the island.

On mainland Scotland, they were often constructed of wood, however, on the Hebrides they were usually made of stone. Construction logically followed the availability of local materials.

To identify a Crannog, look out for a small promontory of rock well away from the shore, but not too far as to make construction difficult or a causeway too long. On Lewis the sites still have substantial piles of stone on them, although rarely can you identify a structure.