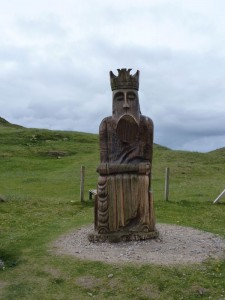 Uig, is not only known for its extensive golden sands, but also because of a discovery of a Viking Chess set in a small stone chamber at the edge of the beach by Malcolm MacLeod of Pennydonald in 1831.

Inside chamber were 93 Chess pieces made of Morse Ivory, from the husks of Walrus teeth.  The pieces were probably made in Norway in the twelfth Century during the four hindered and fifty years that the Norse ruled Scotland.

Eleven of the Chess pieces are in the National Museum of Scotland in Edinburgh and 82 are in the British Museum in London.  In 2011, several pieces were displayed at the Museum in Stornoway.  Information about the Uig Chessmen can still be found at Stornoway Museum and also in the Community Museum in Uig.

Many local businesses have made use of these iconic figures, including The Cornet’s Craft at Shawbost.