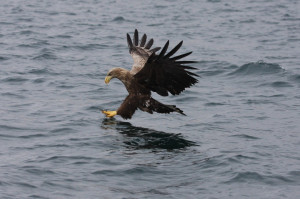 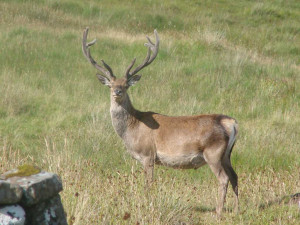 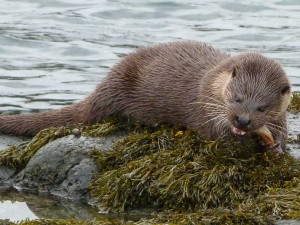 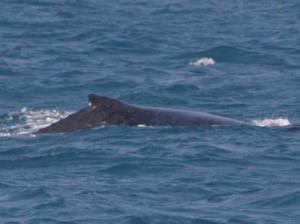 by Chris Ryan of  Out and About Tours

The Isle of Lewis is the most northerly of the Western Isles, and is part of an archipelago situated on the extreme edge of Scotland. The island is blessed with a diverse range of habitats many of which are rich in wildlife. Although Lewis is the most densely populated of the Western Isles, much of the population is centred in and around Stornoway. This leaves large areas of the island sparsely populated, with most of the small rural communities hugging the coastline.

The southwest of Lewis is a complete contrast to the north, as it contains some of the most beautiful beaches on Lewis, and is altogether a much more rugged landscape. The Uig hills are very rugged indeed and are known to support several pairs of breeding Golden Eagles and a sizeable herd of Red Deer. There have been a number of sightings of White-tailed Eagles in this area, and these magnificent birds are certainly expanding their range following re-introduction to Scotland,  one of the best wildlife attractions,

The coastline of the Uig and Bernera district is constantly being pounded by the Atlantic Ocean, and bears the brunt of the south-westerly gales of autumn and winter. This has created a very dramatic landscape where in addition to the wonderful beaches and flower covered machair, there are the majestic cliffs and sea stacks at Mangersta.

Southeast Lewis is a huge contrast to the Uig and Bemera district, as it totally lacks the fertile soils and golden sands. It is however an area that is full of lochs and lochans and these together with the surrounding moorland and rolling hills, provide rich habitats supporting a diverse range of wildlife attractions.

The south-eastern area of Lewis is known as the Pairc District, and much of the land is under the ownership of the Pairc Estate. The district is named thus, due to the estate having managed much of the land as a deer park. Red Deer are still present in this area today, as well as in the North Harris hills and the Uig District.

The Pairc District forms a part of the aptly named South Lochs District of Lewis, and the many fresh and salt water lochs are home to a large variety of  wildlifew, waders and other shoreline feeding birds.

Among the many species of wildlife that can be seen feeding in this area are: Redshank, Greenshank, Oystercatcher, Curlew, Ringed Plover and Dunlin. Shelduck and Red-breasted Merganser are to be seen on Loch Erisort, and large numbers of Greylag Geese and Lapwing are found throughout the district. Merlin can be seen speeding over the moor in pursuit of Meadow Pipit or Wheatear, and our most common bird osprey the Buzzard is well represented in this part of the island.

Some of the quieter lochs may have a pair of Red Throated Divers fishing on them, and if you are very lucky, you may even spot a pair of the elusive Black Throated Divers. South Lochs is quite a sparsely populated area of Lewis, and is one of the best places on the island to see Otter.

Otters are sensitive to human disturbance, and although we have a good population on the islands, the quieter areas tend to be more rewarding for the otter spotter. The central part of Lewis consists of a vast area of peat moorland and bog dotted with many fresh water lochs. Many of these lochs are home to sizable populations of Brown Trout the ancestors of which arrived towards the end of the last Ice Age approximately 10,000 years ago.

This central part of the island has been recognised internationally as an area of great conservation importance due to the large number and variety of breeding birds it supports.

Woodland is a relatively scarce habitat on Lewis, with the most significant area being the Stomoway Woods. This large woodland policy was created by the Matheson family following their purchase of the island in the mid-1840's, and encircles the Lews Castle that was built by Sir James Matheson. The Stornoway Woods support several species of birds and plants that are not to be found elsewhere in the Western Isles, and is home to the only flock of Rooks resident on the island. Attempts have been made to introduce more woodland throughout the islands, but most of this has been in the form of shelterbelts planted with non-native and unsuitable species such as Lodgepole Pine.

Several rivers on Lewis still have significant runs of Salmon and Sea Trout, and sport fishing is very popular. The Guinness Book of Records recorded the highest catch of Salmon by a single individual using a rod and line in one day, on the Grimersta system of rivers.

Finally, we must not forget the largest and most abundant wildlife habitat of all, the sea. The sea surrounding the Western Isles is home to a huge variety of wildlife. Both the Atlantic Grey and Common Seal are to be found, but on Lewis you are most likely to come across the Atlantic Grey that can even be seen regularly in Stornoway Harbour as they follow the fishing fleet in looking for an easy meal. Dolphins, Harbour Porpoise and several species of Whale pass through our coastal waters and can sometimes be seen from the land on a calm day.

There are a number of operators who organise boat trips to take visitors to some of the very inaccessible parts of our coastline, as well as offering trips to St Kilda and the Flannen Isles.

In general, Lewis and its neighbouring island Harris cover a large geographic area, and many hours can be spent travelling around trying to identify good wildlife watching habitats. There are several qualified guides on the island, one of whom is also a qualified wildlife guide. A guided tour in the company of a local guide can help you to optimise your wildlife watching experience and give an insight into island life that is less likely to be gained when travelling on ones own.